Data Consult > Uncategorized > What is Wi-Fi 6 and why might I need it? 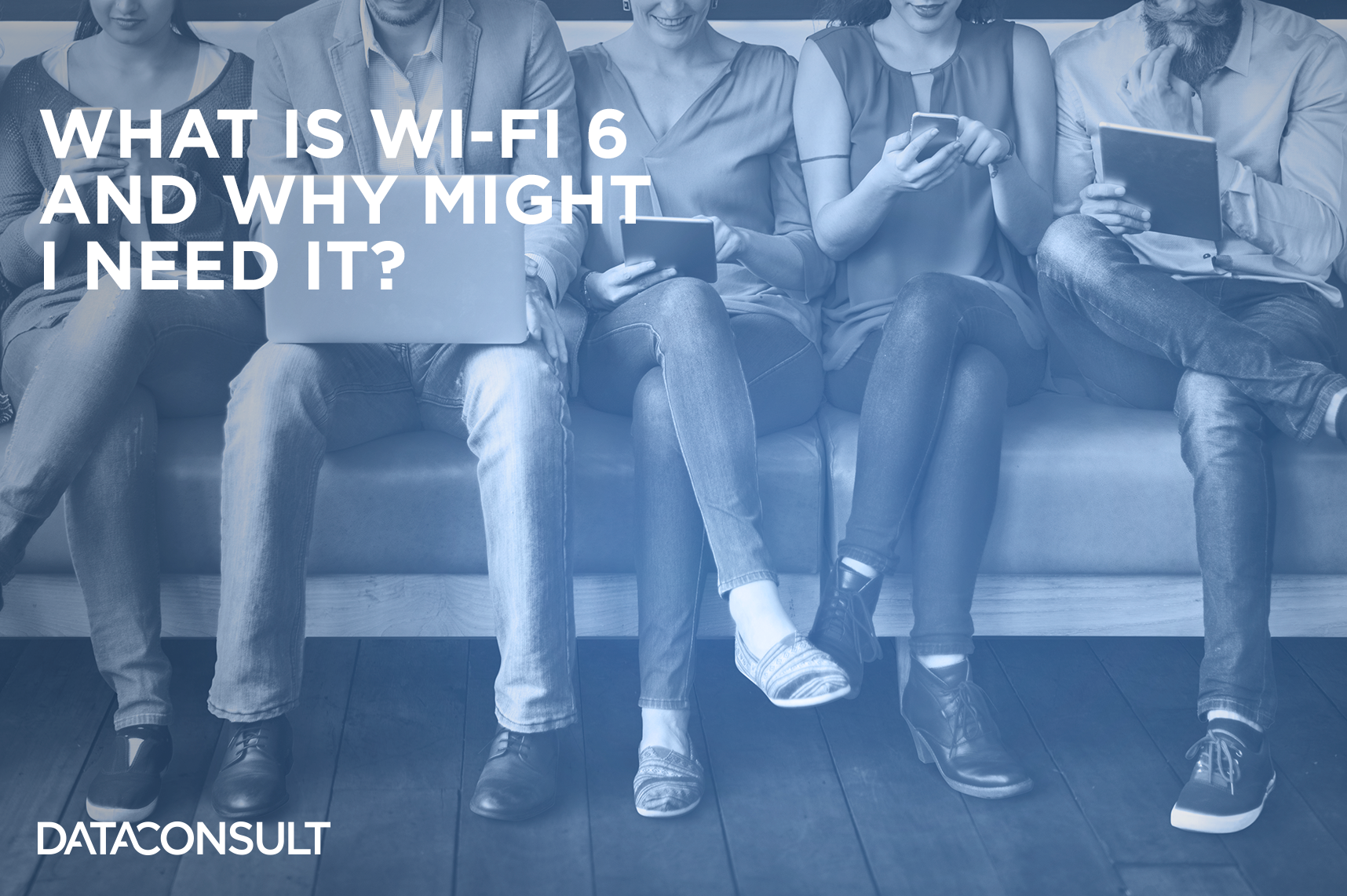 In the past couple of months, we have all been hearing of the next evolution in wireless technology, Wifi 6. In this article I will tackle the ins and outs of this next stage in Wi-Fi and hopefully arm you with the knowledge needed to make the “informed” Decision.

We are all excited to see that the new standard is out. Major vendors, from Cisco to Samsung, are rolling out both network and end-user Wi-Fi 6 devices. But what does it mean for the end-user and the network administrator?

The Drive behind Wi-Fi 6

The Drive behind Wi-Fi 6 is not only about throughput. It is designed to lay the groundwork needed to support the strain on the network brought by an explosion in BYOD, IoT, 4k and 8K Streaming, Virtual and Augmented Reality.

Here are some Wi-Fi 6 “numbers” in comparison with the Current Wi-Fi 5 Standard:

How Wi-Fi 6 achieved  these numbers, you ask?

Well, it’s mostly based on 7 core technologies/features that have been brought together under Wi-Fi 6: (WARNING: It gets technical from here on 🙂)

Used in W-Fi 6 to combine multiple signals into a single channel. With the Wi-Fi 5 we are using  256  QAM which allows for 8 bits/Symbol, while Wi-Fi 6 uses 1024-QAM, meaning 10 bits/symbol leading to a 25% increase in throughput.

Wi-Fi 6 will be using a 4x longer OFDM Symbol which allows it to create a larger number of  subcarriers. In comparison Wi-Fi 5 uses 235 subcarries while Wi-fi 6 will use 980 subcarriers, this will lead to at least 11% throughput  and increased coverage.

OFDMA greatly increases the connection efficiency for Wi-Fi 6. It allows the packet to carry multiple Data chunks to multiple devices simultaneously. If we were to compare this to a delivery  van, without OFDMA each van could only deliver one package to one device at a time. With OFDMA, each van can deliver multiple packages to multiple devices at the same time.

Wi-Fi 6 will support a larger Channel, double,  than the current 80 MHz used by Wi-Fi 5. Think of Channel Bandwidth as a Highway, the more channels you have, the more Lanes you have access to. This will create a faster connection between the end device and the Router/Access Point.

MiMo is a technology that allows a router or Wireless Access Point to communicate with multiple devices at the same time. Right now, MU-MIMO with Wi-Fi 5 allows for communication with four devices at a time. Wi-Fi 6 will allow devices to communicate with up to eight. You will see the 8×8:8SS laber which stands for 8 in, 8 out and 8 Spatial Streams.

TWT allows the connected devices to a Wi-Fi 6 network to plan their communications with the Wireless Access Point. This reduces the amount of time needed to keep their Radios powered leading to less drain on batteries. This is very important for smaller devices such as IoT Sensors that don’t need to be sent all the time and only wake up to update.

BSS Color is used to maximize the quality of experience, and efficient reuse of spectrum. It also                  addresses interference issues seen in older Wi-Fi Networks. BSS Color does this by color-coding a shared spectrum with a number that is included within the frame that is passed between the device  and the Access Point. This allows it to decide if the simultaneous use of the spectrum is permissible or not.

Do I need it right now?

The Next Question on a CIO or CTO’s mind will probably be, “Shall I go out now and invest in Wi-Fi 6?”. The answer will most likely be “well it depends on your current situation”. I will explain using these 3 scenarios:

Just around the Corner

In summary, I expect Wi-Fi 6 will deliver on its promise. The Promise of stability, quality of experience, performance, and security. This means great things for critical technologies reliant on Wi-Fi, such as IoT, BYOD, VR, and Ultra HD Streaming.

It does not stop there. The Wi-Fi Alliance is as we speak working on Wi-Fi 6E that utilizes the 6GHz spectrum. This is a game-changer for end-users and Wireless Telco alike. The capacity of 6 GHz is enormous, providing more spectrum and larger channel bandwidth. That means a larger capacity to support even more devices and bring in next-generation wireless experiences to end-users.

For more information about wireless technology or solutions inquiries, please get in touch with us (Reach Us)

Raed is a Senior Solutions Architect at Data Consult, he has been consulting customers for more than 15 years, he architected networks for Service providers, Enterprises and Commercial Companies.

He possesses all the expertise to provide the right vision and needed growth to any organization.

An attentive dad, very much admired for his parenting skills. He has a distinctive communication method, as he can explain rocket science to a 5 year old. A lot of DC employees rely on him for advanced technical and general knowledge.